The History of Pi Nu Chapter

In the summer of 1970, fifteen men (Brothers Ronald Baskins, Abraham Bassie, Will Blount, Johnny L. Brown, Larry L. Clements, George Demeritte, Herbert Greene, Harold Martin, Daniel McPhaul, Bernard Pennington, Alfred J. Shootes, Bertrum Smith, Hubert Thompson, Rufus Tribble and Lt. Colonel Charles W. Walker) who resided in the Southern region of Dade County, Florida petitioned the International Headquarters for a charter to establish a graduate chapter of Omega Psi Phi Fraternity, Inc. The arduous task of starting a chapter was evident as the International Office required an insurmountable amount of paperwork and proof that a new graduate chapter would not be a detriment to the existing graduate chapter (Sigma Alpha). Through the perseverance of the fifteen Brothers along with the assistance of the Seventh District Representative, Brother Edward Braynon, the International Headquarters gave the men the “green light” to pursue their dream.

On Wednesday, February 17, 1971 the idea became a reality, thus Pi Nu Chapter was founded. At an elegant evening on Wednesday, March 31, 1971 at the Homestead Air Force Base Officer’s Club, the charter was presented by Brother Edward Braynon along with representatives from the International Headquarters. After the charter was granted the need for leadership was apparent. The small membership elected the following Brothers to guide this new chapter in its endeavors:

The chapter has hosted and co-hosted the Florida Statewide Organization Workshop. There have been Chapter Brothers who have ascended to Fraternity positions on all levels (i.e. Regional, State, District, and International) along with Brothers achieving the honor of being selected as “Omega Man of the Year” on the State, District and International levels. The Chapter’s local Talent Hunt Program has sent winning contestants to all levels of the Fraternity’s competition with the awarding of scholarships. This Chapter has been selected “Chapter of the Year” more than three times on all levels. In addition to an assessment imposed by International Headquarters for the United Negro College Fund (UNCF), Brothers of Pi Nu have collected additional monies at strategic locations in the South Dade communities. Other activities at the chapter’s young age included the Thanksgiving Project, Christmas Toy Drive and outings with underprivileged children.

Three years after the chapter was chartered, Pi Nu initiated its first aspirant member, Brother L.T. Clayton, who is still actively involved today. The Chapter has brought to Omega approximately 145 Brothers at 31 different times since 1971. Many years have passed since the charter members accomplished their difficult mission in 1971 and Pi Nu Chapter continues as one of Omega Psi Phi Fraternity’s strongest chapters today.

Keeper of Records and Seal

we the brothers of pi nu honor our very own 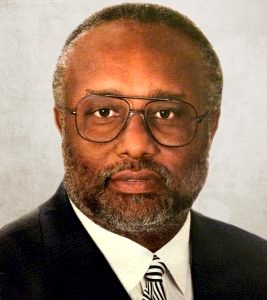